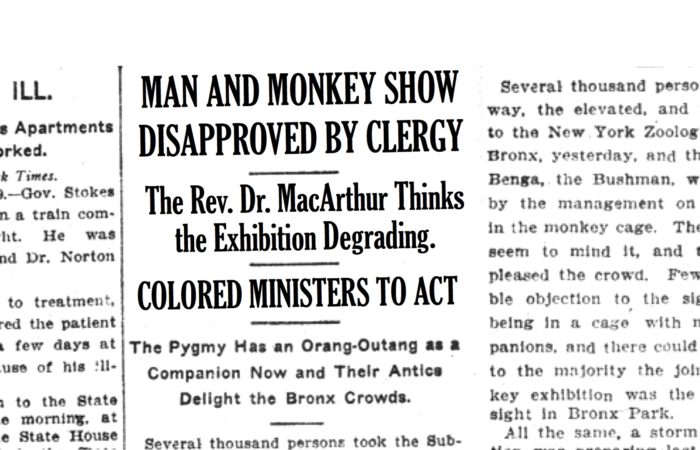 Spectacle: The Astonishing Life of Ota Benga by Pulitzer Prize-winning author Pamela Newkirk explores the tragic life of Ota Benga, who was put on public display in the Monkey House of the Bronx Zoo in New York City. A fascinating and well-written history. PURCHASE Ota Benga: The Pygmy in the Zoo

Ota Benga: The Pygmy in the Zoo by Phillips Verner Bradford and Harvey Blume is another book exploring the tragic story of Ota Benga. Bradford was a descendant of Samuel Verner, the man who bought Ota Benga and had him put on public display. The book is provides additional information that is interesting, but it also is somewhat uncritical when describing the relationship between Benga and Verner. PURCHASE Human Zoos: Science and Spectacle in the Age of Colonial Empires is an edited collection of essays exploring the operation of “human zoos” in America and Europe during the past two centuries. PURCHASE From Darwin to Hitler

From Darwin to Hitler: Evolutionary Ethics, Eugenics, and Racism in Germany by historian Richard Weikart traces the impact of Social Darwinism on the devaluation of human life in Germany up to the rise of national socialism. PURCHASE The Death of Humanity

The Death of Humanity by historian Richard Weikart examines key ideas that have led to the devaluation of human life in contemporary society. PURCHASE Freak Show: Presenting Human Oddities for Amusement and Profit by Robert Bogdan is one of the most comprehensive histories of freak shows, including the examples explored in the documentary Human Zoos. PURCHASE Freakery: Cultural Spectacles of the Extraordinary Body edited by Rosemarie Garland Thomson is a collection of essays exploring the practice of demeaning certain human beings as “freaks” and putting them on public display for entertainment and profit. PURCHASE